Forbes has named squash the #1 healthiest sport in the world many years in a row.

All 6 courts have undergone upgrades in the 2017/2018 season including: new flooring, plastering, line markings, walls and ceilings painted, new LED sensor lighting (switching off after a few minutes if no movement on court), under-floor heating and glass back doors and walls (courts 5 & 6). All courts have spectacular viewing areas (come see!). We now have some of the best squash facilities in Ireland! 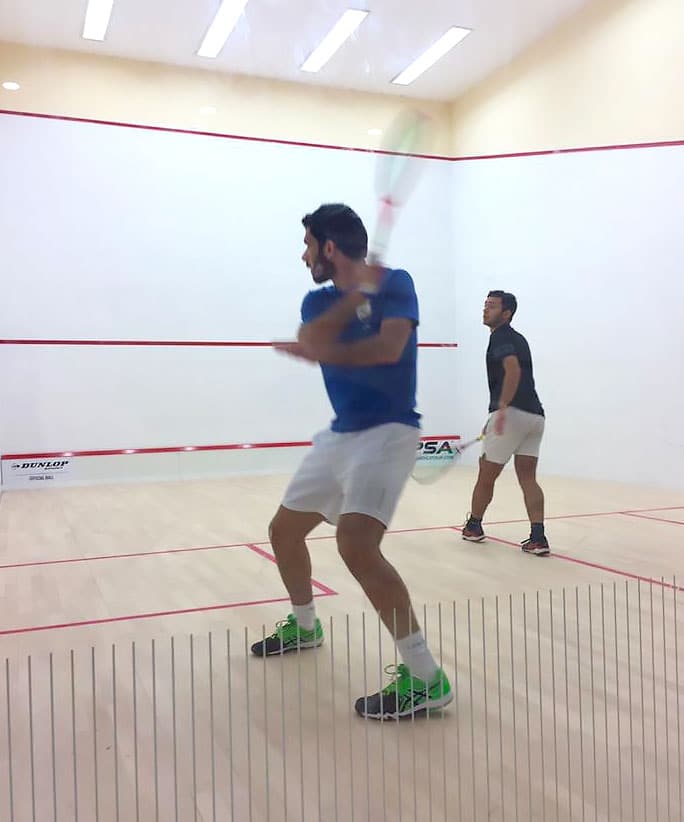 6 week courses for members and non-members of all levels:

Club coach Dave Noone provides daily coaching sessions at the club for both beginners and improvers, juniors and seniors. Private and group sessions are available.

There was an uptake in the number of women taking up squash coaching this season and last season with coach Dave Noone providing Women’s group coaching on Mondays. The is proving to be the most popular adult group session. Private and group lesson also available. There is an excellent number of juniors being coached on a weekly basis.

New “GLTC Squash” WhatsApp Group.  It has been the main medium of communication – is a great way to introduce new squash members with current squash members and to help them find games.

This is also a great place to hear about upcoming events, ladder, slot cancellations, competitions and general squash committee updates.

Squash Events During the Year

Work your way up the ladder sections as you improve your squash. The Squash ladder takes place weekly on a day of your choosing. The people you play in your section will be of similar standard so don’t worry about being a beginner/improver. Contact Cormac McMahon on 086 0809924 to join next month’s ladder.

In the 2017/2018 season “there were 28 in the ladder in September and I’ve heard back from some of the new entrants that they’ve really enjoyed the regular competition and the opportunity to meet new players and this has lead to friendly competitive matches outside of the ladder system which is really what it’s all about.”

GLTC Squash section have numerous blitz’ throughout the year. In 2017/2018 season our Hallowe’en Squash Blitz was a huge success with the largest attendance for a number of years. A total of 40 male and female players were divided into 5 groups of 8 with seeded entry to accommodate all levels of squash. The tournament was open to other club members within the province, with entries from clubs all over Connacht. One-day events seem to attract big numbers, suiting most people’s busy lifestyles. This is a fantastic way of introducing friends to squash and increasing the number of members playing the game. Thanks to our past blitz sponsors, The GTLC Golf Society, CW Distributors and Tommy’s Pro Shop.

Following on from a Connacht Squash meeting held earlier in the 2017/2018 season, it was proposed that some ammendments be made to the format of the league with a view to:

With this in mind the following proposals were put in place. It now comprises of a Mens A & B League and a Ladies League. The A league is an individual league for those players of a high standard looking to get quality matches. The B league is comprised of teams made up from a club’s lower ranked A layers and B team members from last year. The B league has been split into North/South Connacht competitions which means less travel times for away games.

A big thumbs up from all players for this beneficial change. The changes have meant that GLTC now has three teams entered in the B League, up from two teams the previous year.

Players and GLTC members can view results at www.connachtsquash.com.

Back in May, Ireland finished 2nd in the European Junior Championship U17 in Prague. This is the highest finish from an Irish team in Irish Squash’s history. GLTC’s Donal O’Shea was part of the travelling team which included Scott Gillanders, Sam Buckley, Sophie O’Rourke and Emma Lundy. The National coach was our very own resident coach, Dave Noone. The team format for the Euro Juniors is 2 boys and 1 girl play per tie. The Irish team topped their group, beating some strong opposition including France and Spain. Battled past Scotland in the 1/4 final, The Netherlands in the semi final before losing a tight final to England, 2-1. A historical result.

Danny Lynch won the Boys U11 Munster Junior Open at the weekend. He beat all the top players in the country on his way to the final where he beat Sutton’s Aaron Cullen (Irish No.1) 3-1. Danny also claimed success in the U11 Sutton LTC tournament. This was no mean feat, for the past decade Sutton have produced some of Europes top juniors. Hopefully this will be a sign of GLTC’s bright future in junior squash. Congratulations Danny! Well-deserved and keep up the hard work!

In the Connacht Junior Open, our best performing juniors were Danny Lynch in U11, who was just pipped by the top seed in the quarter final. Rob Clery in the U13, also reaching quarter finals. As did Niall Brennan U17, who was very close to victory, losing in the 5th. Donal O’Shea played a blinder reaching the U19 final, only to be beaten 3-1 by Conor Moran. Ranked in the top 5 in Europe.

The first Senior Grand Prix event took place in Kildare on 22nd – 24th September. Our club coach, Dave Noone, losing in the semi-finals, but finished 3rd overall. Donal O’Shea and Niall Brennan finishing well inside the top 16 – a fantastic achievement!

GLTC, under coach Dave Noone, currently has approximately 100 junior players being coached on a regular basis. Up from just 10 juniors when Dave joined as a coach initially. What a huge achievement. Well done Dave!